“Can you name some spices that are native to India?”, whenever I ask any class at school, Instantly a couple hands shoot up and I hear, “Curry.” I have heard it so many times  over the last seven years, that now….whenever I am  talking about food and spices from India, my opening line is, “Curry is not a spice!” Now lets talk about the real spices – Pepper, Tumeric, Cardamom, Cinnamon, Coriander, Cumin, Mace and so on……

Some of my spices 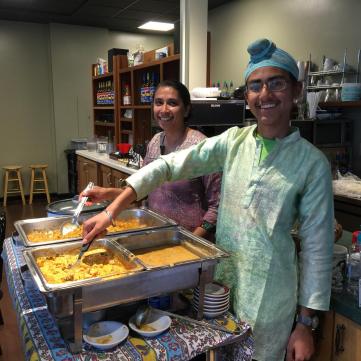 Dishing out different kinds of curry

Often, mention of Indian food always triggers an automatic response, ” I love curry.” And then I wonder.. which curry? Well!  growing up in India, curry to me was anything with a sauce. As I hopped from house to house in my neighborhood savoring different kinds of “curries”, not only did they vary in taste, they also varied in color, as they could be white, creamy, yellow, orange, brown or green. It was clear that, there was no one particular combination or spice-blend of making sauces. Every cook had their own unique way of combining spices and making their own sauces also known as curries….

Then there is curry leaf that has no connection with the sauce. It is just a leaf, that we called “Kari pata” used mostly in South Indian cooking for seasoning in hot oil with mustard seeds or in a coconut chutney or a complex spice blend.

I had never heard of that dreaded yellow concoction called the “curry powder.” I saw it for the first time at a Natural food store in South Carolina, I tried it, somehow could never warm up to it. It is often used in soup recipes or any recipe, that need that Indian touch! Perhaps, a western concept of the “Indian touch!”

Does anybody want it?

Thankfully Wikipedia has it right – their definition of curry  – It is a dish originating in the cuisine of India. The common feature is the use of complex combinations of spices or herbs, usually including fresh or dried hot chillies. The use of the term is generally limited to dishes prepared in a sauce. Although the British coined “Curry”, the original word “Kari” in tamil has existed for 4500 years.

I love to cook and write. Growing up in India, I learned how to make rotis and blend spices for different dishes. Now my cooking, here in the Montana is more focused on local, seasonal produce, cooked and flavored in many more ways....I enjoy cooking for my family, friends, gatherings at home and for fundraisers. View all posts by Ish

2 thoughts on “What is Curry?”

“Mommy, are you going to the doctor again?”

Cooking with a Wallflower
WordPress.com

WordPress.com is the best place for your personal blog or business site.

Tips for how to budget and live frugally